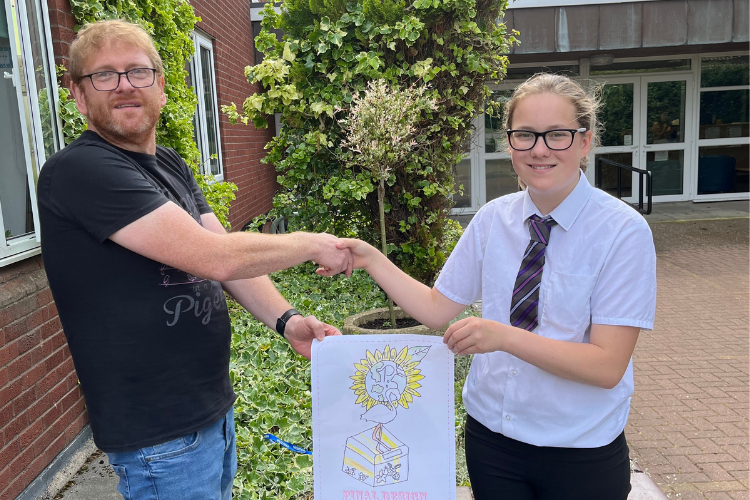 Year 10 students were briefed to design and make a prototype trophy for the upcyling category of the Warkworth Flower Show.

Their client was Mr Parks, who is a member of the Show’s committee as was his late wife, Rachel Parks, who was a very well-respected member of JCSC.

In his brief, Mr Parks stated how he would like the trophy to reflect Rachel in some way as she introduced the upcycling category to the show for young designers. He also commented how Rachel would have appreciated the students of JCSC designing the trophy themselves.

Once the students quizzed Mr Parks about his wife’s interests, likes and what he would like featured in the design, they got to work, treating the project like a mini-GCSE coursework task.

Mr Parks had regular drop-in sessions to provide feeback on designs and manufacturing processes and finally shortlisted his 12 favourites from a class of 20.

These were exhibited to the committee of the Show as well as friends, family, and parents of those nominated.

The exhibition took place in the Main Hall at Acklington Road on Thursday23rd June 2022 when a winner and runners up were selected:

Allarna’s design will now be made within the school workshop and manufacture is currently underway with the aim of presenting the tropy to Mr Parks on the morning of the last day of term ahead of the Show on Saturday 20th August.

Well done to everyone who worked on this project, it was fabulous to see all the responses to the brief.

Our congratulations go to Allarna, we’re sure your trophy will be very sought after at the Show.

This website uses cookies to improve your experience while you navigate through the website. Out of these, the cookies that are categorized as necessary are stored on your browser as they are essential for the working of basic functionalities of the website. We also use third-party cookies that help us analyze and understand how you use this website. These cookies will be stored in your browser only with your consent. You also have the option to opt-out of these cookies. But opting out of some of these cookies may affect your browsing experience.
Necessary Always Enabled
Necessary cookies are absolutely essential for the website to function properly. This category only includes cookies that ensures basic functionalities and security features of the website. These cookies do not store any personal information.
Non-necessary
Any cookies that may not be particularly necessary for the website to function and is used specifically to collect user personal data via analytics, ads, other embedded contents are termed as non-necessary cookies. It is mandatory to procure user consent prior to running these cookies on your website.
SAVE & ACCEPT
file